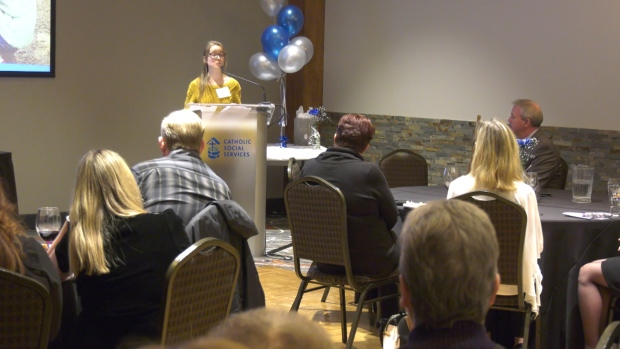 EDMONTON — A “remarkable” $2.1 million was raised by Catholic Social Service’s 2019 Sign of Hope fundraiser, giving cause for celebration in Edmonton Thursday night.

The annual fundraiser enables an estimated 20 CSS programs, such as the Welcome Home program, women’s shelters, and supports for victims of elder abuse.

As well, it supports the CSS’ Acquired Brian Injury Program, which helped 21-year-old Amanda Burt rebuild her life after a devastating car crash at 16.

“We’re supposed to learn who we are in those years, and I had to learn who I was from the start. I didn’t have those pre-adolescent years of building myself up,” Burt recalled.

“I basically had to start right then and there, like this is who I am: Go, you’re on.”

Burt shared her story at the Thursday evening event, telling donors and supporters how the CSS program connected her to a disability support worker who helped her make a resume, apply successfully for a job, and start post-secondary school in Red Deer.

“They came in after I was out of the hospital already and I was just needing to be reintroduced to the world,” Burt said. “They made that process a lot simpler.”

Each year, Sign of Hope counts about $2 million in donations – and 2019 saw no less.

“It’s tough economic times right now and donations are down amongst a long of charities in the philanthropic sector,” Davies said.

4,000 potholes filled in 2020 despite closure of city asphalt plant

University of Alberta scientist to participate in NASA Mars project