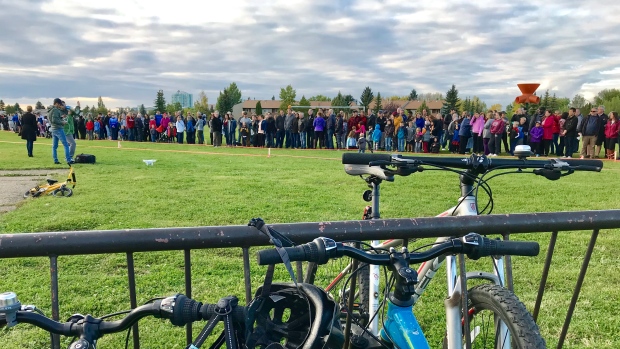 About 400 people took to Keheewin Park Wednesday to protest an affordable housing proposal that they say is “too big and too close” to Keheewin School.

“The 20 metre distance, we just feel is too close,” said parent and area resident Lyndsey Olsen.

Capital Region Housing wants to develop a 135 unit development just north of the school, on 1.5 hectares of land deemed surplus.

The project is one of nineteen similar surplus school site developments across Edmonton.

On Wednesday, Keheewin residents planted stakes and strung construction ribbon to mark the developments proximity to the school, which they say would see a fence constructed approximately metres away.

Residents at the protest were concerned the project, which includes 4-storey apartments and townhouse units, will bring increased crime, traffic problems and parking shortages.

“There are all kinds of ‘what if’s’ and we’re worried, mainly for the safety of our kids,” Olsen said. “It’s not just a few of us that feel this way.”

The City Councilor for the area, Michael Walters, pointed out that consultations on the site have been extensive and ongoing since 2015.

“The school board has never raised any objections to the plans, “ Walters told CTV News Edmonton.

“You always have to ask yourself ‘what’s the risk of it being that close?’ and so far, from a technical perspective, no one other than community members have raised objections.”

Walters said he’ll reserve judgement until after an upcoming public hearing on the project, which many of the protesters say they plan to speak at.

“I hear them that proximity to the school is an issue,” Walters said. “Although I hear that plus traffic, plus crime, plus property values, plus some people who do say that they don’t want these kinds of folks in their neighbourhood.”

Edmonton teen using his violin to see the world